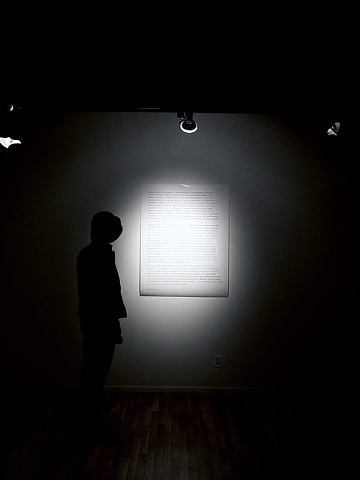 There was a mysterious, science fiction, third component to the exhibition that I couldn't edit out. Here is the text of the "alien" curatorial statement.

As Head Curator for the Museum of Indigenous History in fifth largest metropolitan habitat on the third biggest continent on this planet with cultural amnesia, I am pleased to present our latest hypothesis on the historical events of a culture that lived some 1800 solar cycles ago. Researchers are in agreement that the creatures who inhabited this planet on which we have built our colonies were a greedy selfish race that would have died from their own appetite for technology and energy had not the sneaky asteroid 7801 G.G.C., some 4.3 klickazuls in diameter, slammed into their largest ocean. It has been an extremely daunting task reconstructing their history since any records which were not burned for fuel by the survivors during the ensuing ice age became unreadable due to the instability of the storage medium, a sure sign that these creatures were too concerned with their own present (even prior to the disaster) to envision leaving a history behind to their successors.

Relatively recently, two archaeological excavations have yielded clues toward understanding this past civilization. About 30 klickazuls from the center of the urban digs, researchers encountered a large, steel vault. Upon gaining access to this environmentally controlled tomb, the researchers located a large cache of magnetically coated tapes. Microscopic analysis of the vault environment suggests that they were used to store large amounts of cellulose materials and rare metals (these may have been destroyed) besides the above mentioned magnetic storage materials. Scientists at the Institute for Pre-colonial Intelligence deciphered the content of the magnetically encoded data, and generated quite a few visual records of individuals. Realizing that other tombs might exist, the researchers searched and soon discovered another vault containing more magnetic storage materials, as well as a reel of transparent media, which contained sequential frames of images comprised of varying amounts of metallic silver deposits. One of the researchers realized that this reel could be projected and viewed at varying rates of speed to create the illusion of movement. We believe that this is also a visual record placing its time within 20 solar orbits of the first tomb discovery.

We present these findings today for you the viewer to piece together. Are they truly the record of a dead race? Why do so many of the still images have similar facial features (as if they were genetically related)? We can only speculate about the original size of the visual records of individuals from this time period. But based upon our experience with other dead cultures on other planets, different species ritualistically presented historically significant figures much larger than life size to emphasize their importance to their progeny.

We present the still photographs and moving pictures together in the hopes that you, the viewer, can help us construct a record of a dead civilization. The Curators